Book Review – She has a mannish style Recent find at the Kinokuniya Sale during the first week of November. I have not seen this book before but it’s actually not a new title. In fact it was released 3 years ago! Published in November 2010 by Bunka. The book is called 気分はマニッシュ by 高田祐子 (Yuko Takada) who is a graduate of Fashion studies from Bunka Fashion College. She is also the designer of a brand called TAGE and you can see more of her works here.

Thankfully, the title was interpreted by either the author or the publisher. The translated meaning of the words actually mean Mannish Mood, or in better grammar – A Mood that is Mannish. But the title given is She has a mannish style. I guess what it is really trying to say is Clothes for women with a masculine style? Whatever the title is, the book is not your usual floaty dreamy dresses. In fact I find that these are more wearable on a day to day basis. The pieces all have a designer touch. Everyone will be asking you where you bought your clothes. There are 20 projects listed but some of them are actually the same pattern but made in a different fabric/styling variation. Let’s have a look!

I had some difficulty taking photos of this book.The challenge was from the fact that the pictures were mostly dark-themed and even the clothes are dark, so you can’t really see the details till you get to the how-to-make page where they show you the outline diagram of the garment. But you can still get the gist of how cool the clothes are from the photos. Oval Coat – with a rounded collar, Puffed sleeves that are gathered at the elbow and extended as a long knit tube down to the wrist. It’s hard to describe it really. It might be easier to take a look at the diagram. From the photograph it looked as if the light gray sleeves was actually a separate long sleeve top below the coat, but it turns out that it IS part of the coat. Now you have an idea of how the photos might be deceiving, we will move on and look at the other garments. The dress has a baggy top with a tight fitting mini skirt attached. The model is shown wearing it over what could be a turtle neck + leggings. There are actually more details to the dress near the neckline but it’s all black so it’s hard to see! Velour blouse. This blouse is made of Velour Lace （ベロアレース）and Crushed Velour（クラッシュベロア） Square Cut & Sewn blouse. This is a very interesting blouse. In fact when you see the how-to-make section you might wonder how it is actually worn! The entire blouse is like a very wide rectangular tube with two holes on the side seams for your arms to stick out of. The top is lined with buttons on the front neckline, and buttonholes on the back neckline. Button as many buttons you want on the sides to adjust the neck opening size. Drape mini dress. This reminds me of one of the Drape Drape dresses but it looks a lot easier to make, at least from what I can see in the pattern cutting layout diagram. Here’s something that will add a designer touch to a plain outfit. 3 different variations of a Tippet. 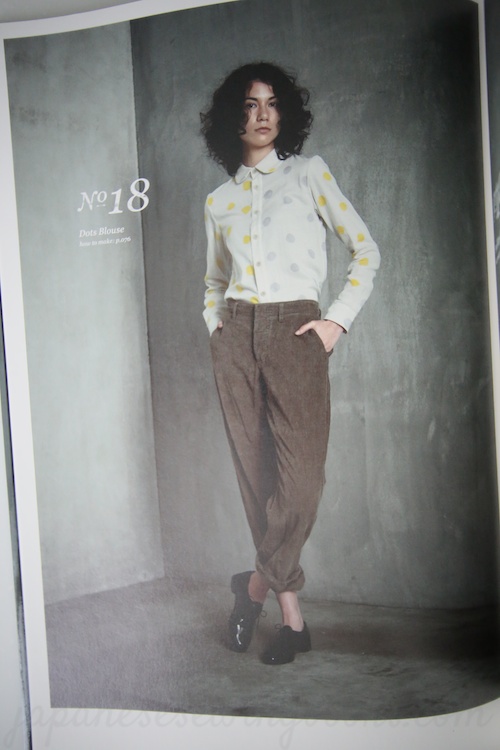 Dots blouse. It is quite a standard blouse pattern but I think it’s a brilliant idea to use 2 different color fabrics from the same series to make the left and right sides of the shirt! This is a pattern that is used twice, for No 14 and 19. No.14 was in black, and it was impossible to see the details. Here it is made in a light khaki stretch corduroy, with a tie ribbon belt (removable). This pair of culottes include side pockets and a zip fly. There is a series of diagrams showing you how to sew that but I can’t quite figure it out. I have never attempted to make one because it looks too confusing. The last pattern in the book is a belt stole. Now here’s a stole/scarf that will never slip off your shoulders. It is literally attached to the belt and the belt is pinned down with a huge industrial looking safety pin. Hmm… ok it might be a stylist’s accessory but the pattern itself did not include instructions for buttons or buttonholes of any kind. So I presume it is entirely up to your creativity how you want to secure the belt. There are 6 pages of additional sewing tips/instructions made up of text+black and white photographs. While some photographs are quite self explanatory, I find that the majority of the photos still rely on some explanation from the accompanying text, so it may not be so useful to you if you are not able to read Japanese.

An example of the typical How-to-make page. There are diagrams included to illustrate the order of make, so you can just refer to the diagrams. Like all other books, there will be cross references from one project to another if there are similar steps involved. It was such a coincidence that I was going to review this book this week, because I just received an email with a translation request for the Velour blouse from this book! I will be posting it up later this week or next but I will link it up from this post again.