Every time I go to Tokyo, it is almost without fail that I end up at Narita the night before my flight. Why Narita? Someone asked me once. There is nothing much to do there, in terms of sightseeing, but anyone who has travelled with young children will understand how difficult it is to wake up really early, lug the kids+luggage to the train station,  challenged by mutliple flights of stairs just to get to the Narita Express train platform, and feel completely exhausted by the time it is time to board a 7hr flight back home.

But that is only part of the reason, the other reason being a chance to visit Narita Aeon Mall for some last minute shopping! If you ever find yourself on a short stopover, transit, or just a couple of hours to spare at Narita Airport, this activity is highly recommended 🙂 There is a shuttle bus service from Narita Airport to Aeon Mall. The timetable is here ,although it seems like a very badly translated one, hope it will help!

I’ve actually blogged about Panodra House before, 3 years ago, when it was just a little corner of the main store in Aeon Mall. This time round, I was pleasantly surprised to discover that there were lots of new shops at the mall, and a new upsized stand alone Pandora House store! It is on the second floor near the escalators, and was quite easy to find. I was immediately drawn to the Character fabrics at the front of the store. Look! A Frozen theme sewing machine on display. Sewing machines on display. Unfortunately due to voltage differences I can’t just bring one home with me. There was a larger display with more machines on the left hand side of the shop with a gentlemen doing a demo on a machine. 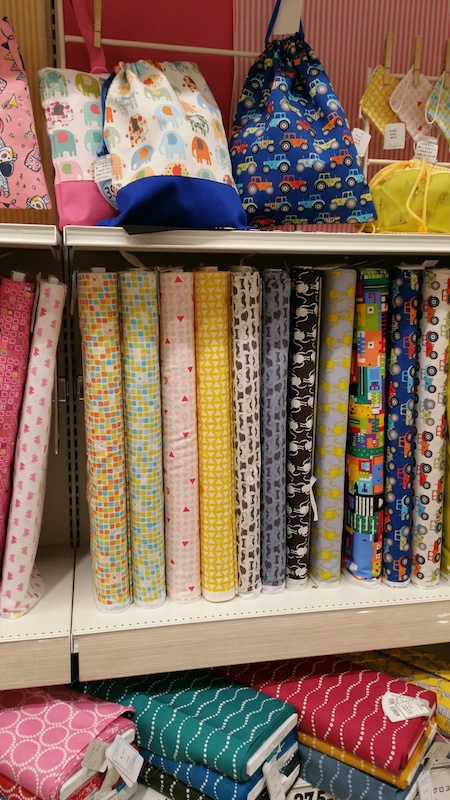 Cut pieces of faux leather. 580yen each if I remember correctly. Fabric sold in multiples of 10cm at 51yen per 10cm (after tax). Not a huge selection, but pretty varied in types and colors. Here you can see some basics like stripes and dots, but also traditional Japanese prints. A little corner for sewing books and patterns. Spotted some M patterns on the side shelf on the left as well. It is not a huge selection, but I also discovered a large bookshop 未来屋書店 Miraiya Shoten right next to Pandora House. I had no time to explore it though, as my time was running out 😛 lots of colors to choose from! I had never come across this before, so I had to take a photo of this. These are plastic encased bells and specially designed for use in baby toys. I wished I chanced upon this earlier, as I made a fabric ball toy for my boy recently, and used 2 metal bells. Now I worry about how it will hold up in the wash. These come in a few different shapes for making different baby toys. Other than sewing supplies, there are also lots of craft supplies, like yarn, wool felting, and this one in particular looks like it’s trending at the moment. I don’t know if it is a brand new thing but its my first time seeing it. It’s called Silicon Motif. Here’s an example I found on Rakuten. I forgot to take photos of the finished products on display, but they were really pretty. Basically you set jewels and charms in a silicon mold. It’s quite similar to the idea of UV resin but I think the results are much prettier.

Image from ABC Craft on Rakuten

Here are some photos of my loot… Not much, as I had limited luggage space left on the last day. Quilted fabric. Already made a new pot holder from the hedgehog fabric. Pre-cut fabrics. Thick and canvas like for making bags. More blue fabrics 🙂 , and a small piece of double gauze with a cute cars print. Stocking up on zips! Knit bias tape for making quick Ts for my little boy. Not cheap, but I hate cutting knit bias tape.

The fabric selection at this shop is not as comprehensive as a full size fabric store of course. If you are looking for designer fabrics like nani IRO, Kayo Horaguchi or Echino, you won’t find any. However, there was a decent selection of Kokka character prints, the classic Sanrio ones plus the trending ones like Star Wars. There were also other Kokka fabrics, lots of ready cut fabrics (0.5m/1m), double gauze fabrics, bag fabrics, kids and baby double gauze fabrics, pre-cut leather, fleece, quilted fabrics and some knits. I picked up a few knit remnants for cheap! Oh there is also Laura Ashley and another brand that was displayed quite prominently. I’ve seen it in one of the magazines but I just can’t recall the name right now. pretty floral prints mostly based on darker and sombre colored fabrics. It starts with a ‘So…’ but I just can’t remember it somehow. Do you know it? Please tell me if you do!

I will be posting photos of my trip to Nippori fabric town soon, once I’ve taken photos of my loot from there. I chose to post this first because it’s the holiday season and time for travel, so it may  benefit some of you who are doing a a few hours stopover in Tokyo.