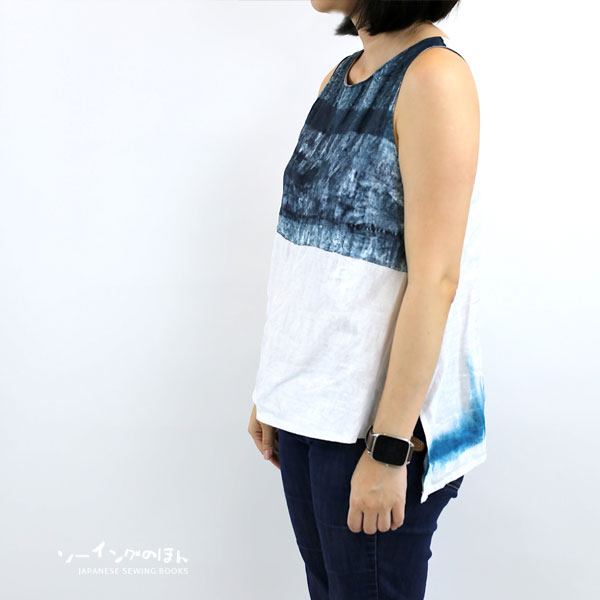 Following up from Part 1 of nani IRO 2018 collection… we continue looking at the new designs that nani IRO has to offer.

This design comes in a few subtrates and colorways. First up is the thin linen in unbleached and brown base. The same design in double gauze, a blue and light brown, almost a champagne gold color? And also, cotton sateen. I think this design is stunning in cotton sateen. Look at the sheen on the fabric! I am particularly taken to the light blue version. From far you can’t really see the artwork but the details upon close up are really gorgeous. If you think this looks like Saaa Saaa from previous year’s collection, then I beg to differ. I would think of Saaa Saaa as a regular width stripe fabric, but Camino more like a pin-stripe fabric. Both are made up of irregular lines. But where Saaa Saaa is a two tone design made up of single color pen sketched lines on a single color background, Camino has an added 3D effect with random black shadings, which kind of makes the lines pop. I actually thought the blue double gauze was embossed with metallic embellishments till I saw the close up picture. It is actually white strokes (looks like chalk?) and some irregular black lines for added shading. The varying strengths of the black strokes is what gives the fabric such an interesting look.

and look at it on this dress below, it does look shiny isn’t it? I think this will be an awesome fabric for a Men’s shirt. or a pair of ladies relax pants. Camino comes in sheer linen too. You can’t really see from these picture, but the linen is quite thin and drapier than regular linen. If you shine a light through it you can see through it. But thanks to the darker colors, it is not actually sheer like transparent type of sheer if you know what I mean. You can see the linen used in the shirt P below. I must say that this design was one of my favourites when I first looked through the new collection. From far, it is simple and there are no bold shapes standing out, but the details are amazing. It kind of looks like some kind of intricate road map The first two colors – the peach and the black are double gauze. while the other two colors – which look like silver and gold, are made of a heavier mix of material in a herringbone weave, which is a V shape weaving pattern. You would probably have seen this in twill or even some men’s shirts fabrics. It is not the first time this type of weave has appeared in the nani IRO textile range, for example, in the nani IRO reversible tote bag tutorial I posted 5 years ago, I used a canvas from the Nani Iro 2013 collection called pencil in white and aqua. This particular fabric feels heavier than the canvas that I had. According to the official website, it is a mix of 55% hemp and 45% cotton. So I believe its more suitable for outerwear. Or maybe structured pants/skirts or even bags. The silver colorway is stunning, and there is even a video of the fabric being rolled out on Naomi Ito’s Instagram which captured the sheen of the fabric perfectly. This fabric was used for the long coat in the R – and in the description it is stated as a thick material suitable for Fall and Winter. On the website, this was listed under the basic range instead of new designs. However, although it bears the same name and motifs as Fuccra Rakuen, the repeated patterns are a new arrangement and I wanted to rave about the Jacquard weave. Jacquard weaves are textured weaves which means you can feel the texture of the motifs and it adds a level of luxe to your garment. This is a 100% cotton jacquard weave and is woven in 西脇 Nishiwaki, which is famous for their long history in Banshu-ori – the production of cotton textiles by dyeing, weaving and finishing in one continuous production cycle. I think the black colorway would be stunning for a nice formal jacket. The grey colorway was featured in the book as a coat as well.

Part 3 (probably on Monday) –  I will go into the new releases of previous designs, some in new colorways, some in new substrates – such as quilted/laminated versions.  See you then!

All images from http://naniiro.jp/ and the book – Atelier to nani IRO’s sewing closet