Book Flip-Through of A Year of Sewing with Nani Iro

It’s finally here! The long-awaited English translation of Naomi Ito’s latest sewing book – 季節をまとう 一年の服 . The English title of the book is “A Year of Sewing with Nani Iro” and it even has a brand new cover! I was so excited when Zakka Workshop sent me the book for a review, and as usual, they’ve done a great job with this one!

(Disclaimer : This post is sponsored by Zakka Workshop, but as always, the opinions are my own!) I’ve shown the contents of the Japanese version previously, so yes at the risk of repeating myself, here’s the list of patterns included in this book. Oh wait, now I don’t have to translate it, it’s all in English!

Other than the obvious fact that everything is in English, I really appreciate the increased font sizes, black print (Japanese version was light blue) and also the more reader-friendly layout across the whole book. I can tell lots of thought has gone into the layout of the book, in the original book the number of pages was 96, in the English version it’s 136. Many of the diagrams were enlarged, and are not packed tightly in a single page in order to save space. I reviewed the Japanese version in March 2021, when it was first released with the 2021 nani IRO collection. I did not refer to the previous book review, but randomly took a few photos from the English version, just to show you a few favorites as well as what the new layout looks like. Coincidentally there are quite a few patterns that remain on my to-do list. Looks like these are the ones I really have to make! 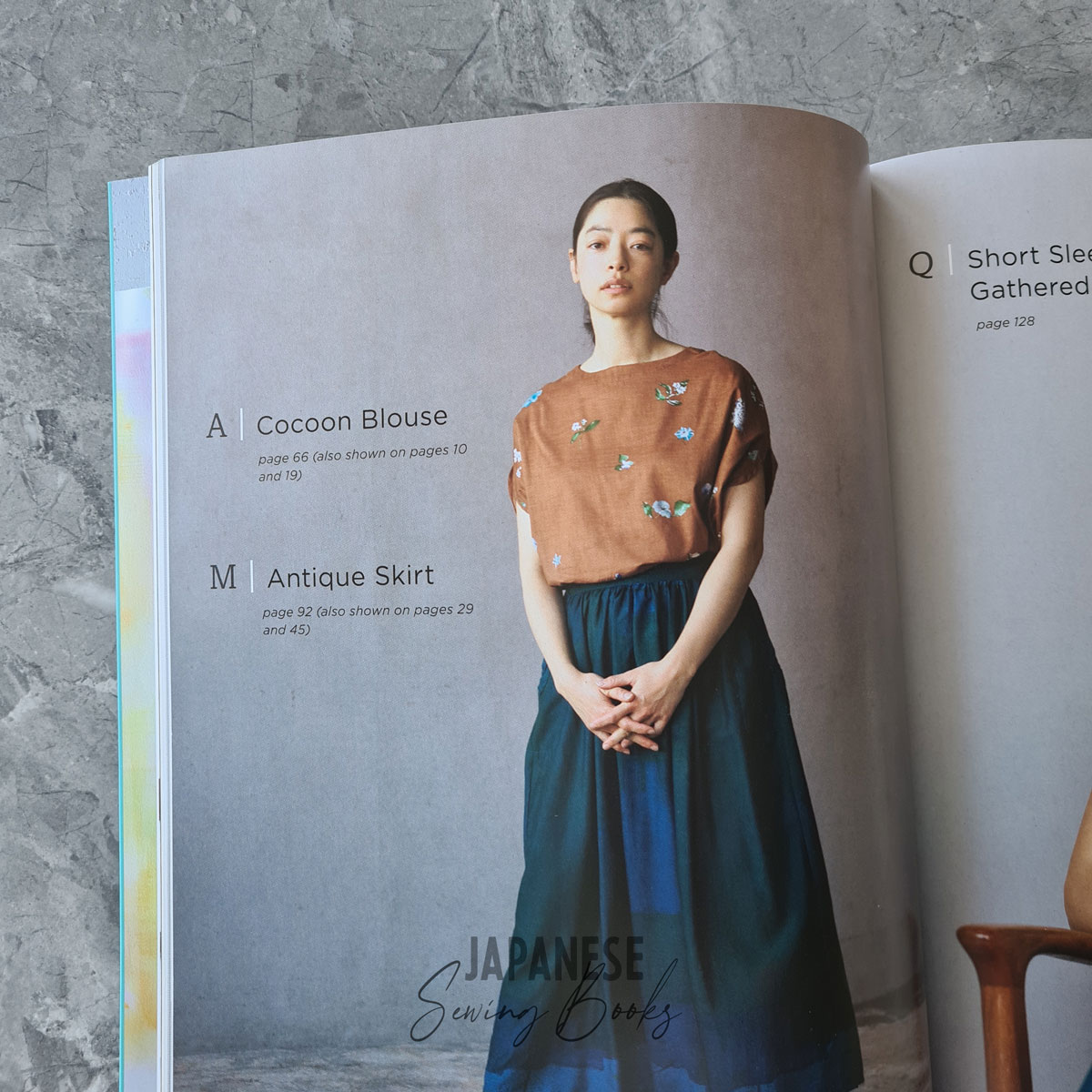 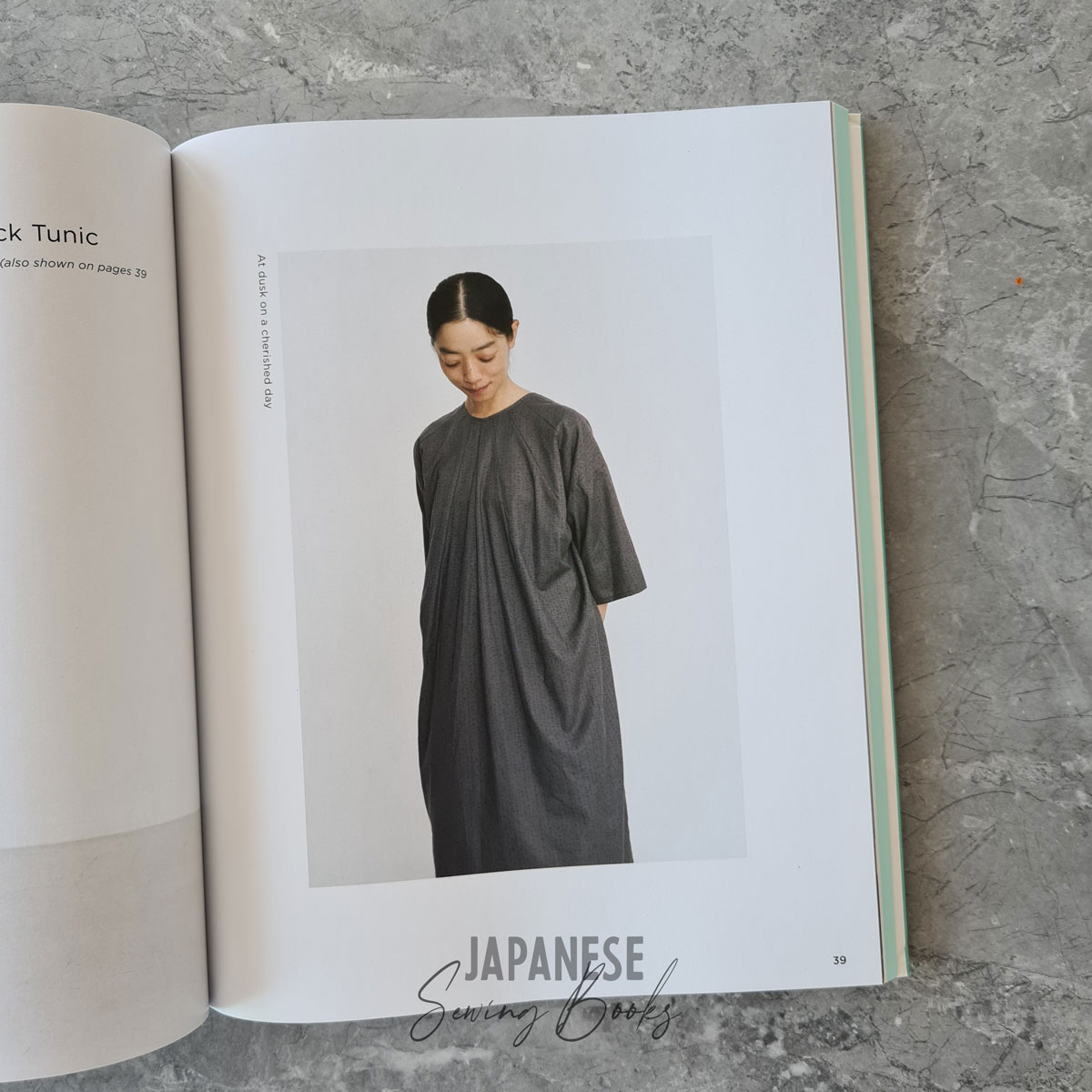 What’s different from this and the Japanese version, other than the language of course, is the addition of Imperial measurements alongside the original metric measurements. The measurements as well as fabric yardage, are provided primarily in yards and inches, with the metric equivalents in brackets. The size chart has also been updated to reflect international sizing standards, which is why in the original book you will see 2L instead of XL. This will benefit those who are unfamiliar with Japanese sizing which tend to run small. In any case, due to the generous ease of the garments, the best way to decide which size to make is by referring to the Finished Sizes chart that is included in every garment’s set of instructions. You can see an example of the finished sizes in the image below. For garments with fitted details, like collars that have button enclosures, I would recommend not to size down more than 1 size in case they end up being too small. On top of the usual patterns and instructions, there are 3 added sections to help you make use of the patterns in the book fully so as to fully utilise the patterns across all seasons. To be honest I did not pay much attention to these sections in the original version because there was too much text to translate and wade through, but now that it’s in English it makes for much easier reading.

“The Fabric” is based on all the fabric used in the book. The showcase is primarily based on nani IRO fabric of course, but also includes a few other substrates that were used to adapt the patterns for all seasons. For each substrate/print, the corresponding pattern is also listed below for easy reference. There is another section called “Experimenting with the Patterns” which to us sewists, is like a pattern hack section. The designer herself, provided some creative ideas on how to make the patterns more interesting and unique. From simple hacks like length variations, to adding contrast details to the garments, lots of ideas here! “Exploring the Garment Designs” brings you through each pattern and discusses the possible fabric variations as well as styling options. As mentioned previously, the fabric options are not limited to nani IRO’s range of fabric and include substrates like wool gauze and even faux fur to adapt the patterns for use during the cooler seasons. The use of different fabrics with different drape, finish and print can also lead to a very different look in the finished garment, and make it suitable for not just different seasons, but different occasions as well. There is also a difficulty scale which can help you decide which project you can probably handle given your skill level or time constraint. Last but not least, here is the book flip-through of A Year of Sewing with Nani Iro. Enjoy!

Where to buy
The book will be released on July 5th 2022, but you can pre-order your copy now from Zakka Workshop

As part of the book release, Zakka workshop will be giving away a copy of this book! More details on my Instagram post here -> “A Year of Sewing with Nani Iro” Book Giveaway

New to sewing Japanese patterns? I will be following up this post with a how-to-use Japanese patterns, using this book as an example. I’ve had a couple of blog posts on this topic before but nothing like a video tutorial to see how it’s actually done! Subscribe to my YouTube channel and you will be notified when the video is ready to premiere!

I’m also preparing for a sew-along for one of the patterns in this book. Stay tuned to my Instagram for more info! It will be some time in August and the sew-along will be at a very relaxed pace, so do join us for it after you’ve purchased the book!

I have been quiet… quietly obsessing with this fabric from nani IRO’s beau yin yang collection from 2 years ago. It is one of my favorite collections since the whole collection is in my favorite monochromatic palette. 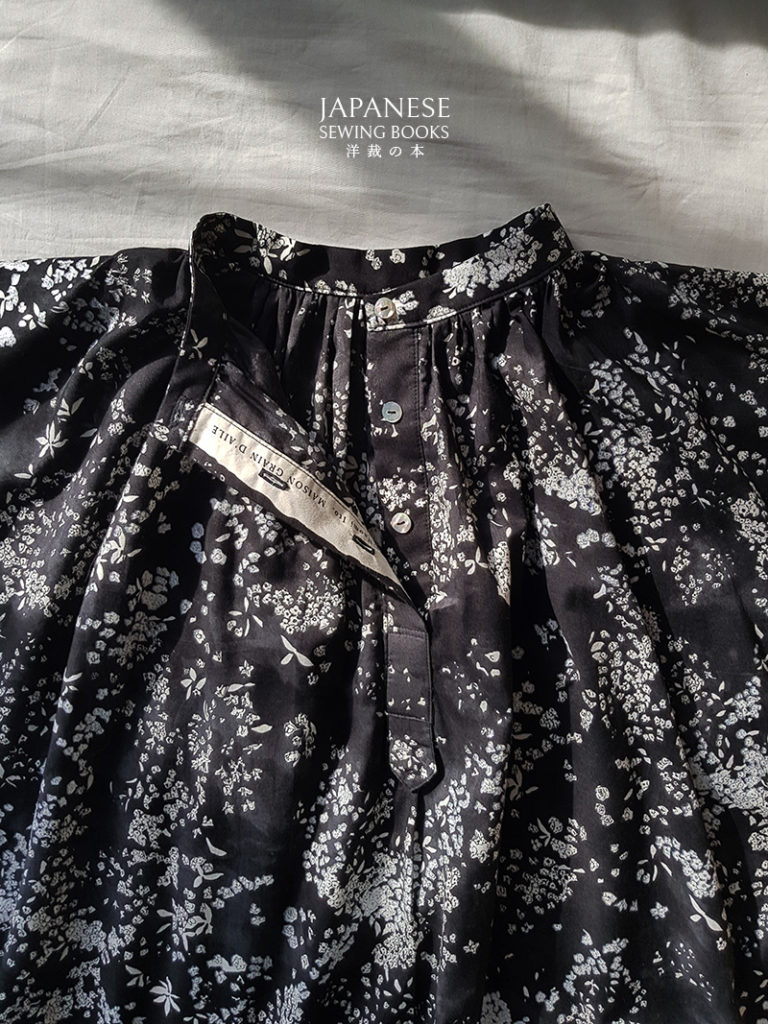 END_OF_DOCUMENT_TOKEN_TO_BE_REPLACED

Book Review – Learn Skills to Sew like a Professional

So I just realized with horror that my last book review was 2 months ago! Where did the time go? If you have been following me on Instagram, I went for a short holiday in June, came back and spent almost of the rest of June busy sewing for my brother’s wedding. Oh and I also released a new bag pattern😛

On top of that I’m doing some partial house renovation at the moment so I’ve had to move things around a bit to make space and that includes some works to my sewing area. So I think you can all understand why now. Keeping up with the blog is difficult because I need to take photos and videos then edit them. and all these on top of my daily full time job as a mother of 3.

Anyway, the good news is the book buying doesn’t stop…. but the bad news is I have a growing pile of them to review. I hope that once the renovation is over I will have more space and the setup will make it easier for me to take photos quickly!

Back to this book review. It’s an English version of a book that I bought back in 2016 when it was first released. The title of the book is Learn Skills to Sew like a Professional.

END_OF_DOCUMENT_TOKEN_TO_BE_REPLACED

In the last blog post I mentioned that there will be a giveaway for this new English version of the nani IRO Sewing Studio didn’t I? Well, it’s happening now on my Instagram account

The book won’t be released till mid June so here’s a rare chance for you to win one before the official release date! Hop on over to take part!