Back to School Sewing Patterns

Last September, I bought this magazine – Cucito Fall 2014. It was lying on my desk with a pile of other Japanese sewing books for review and when I came to it, I thought it was quite late into the Fall season to review this. There were patterns for Halloween which was over by that time. The clothes were also more suitable for fall than winter. So I left it out, not knowing it will be the last of the series! …. .·´¯`(>▂<)´¯`·.

Ever since I started sewing, I started buying sewing magazines as they are obviously great value for money. There are patterns for clothes and accessories from Baby size – Kids. The previous incarnation of Children’s sewing magazine by Boutique-sha was this one – Kodomo Boutique (where kodomo means Children in Japanese) This was the oldest magazine I could find in my collection. Released in May 2007. Look at that price! (That’s about 8USD) These magazines are more than half the price of regular sewing books, but contain more than double the patterns. This is because as a magazine they have loads of advertising, with sponsored projects by fabric companies/stores, as well as sewing machine companies. Kodomo magazine contained only kids patterns. Patterns for boys and girls, babies, as well as kids accessories like bags and crafts.  There were not many step by step photos, and seem to cater to an audience of mothers who are more advanced in sewing since there were not many beginner instructions.

Cucito was the successor to this magazine and it was more beginner friendly, at least in my opinion… There were also matching patterns for Mums and kids, as well as more sewing lessons with step by step instructions. Unfortunately, Cucito seems to have run its course. On the publisher’s website, it states that the last issue of Cucito will be the 2014 Fall edition. It goes on to mention that they have been publishing Children’s sewing magazines, starting from Kodomo boutique since 1974! That’s a whopping 40 years! A whole bunch of patterns. From tops, to bottoms and accessories. For both girls and boys and some for Mums too.

Matching tunics for Mum and Daughter Mickey and Minnie costumes for Halloween, or just that outing to the Happiest place on Earth 🙂 and hats (that’s a faux wool print fabric by the way!)

Instead of a standard format magazine released every season, the publisher says that they will be publishing 5 magazines in different formats and content to update it to today’s sewing needs. So do look out for those as well. I have already reviewed the first one, Cotton Friend Kids. Pricing wise, it is more expensive than the original magazine, at 972 yen compared to 880 yen for Cucito magazine. I won’t be reviewing the Handmade school accessories book because I have way too many school accessories books lying around and they are really mostly the same patterns.

Today we are going to take a look at the Spring Issue of Cucito  2014. This issue will satisfy anyone who loves sailor suits. Especially adorable on children! The sailor tops come in boys, girls and even an adult version for Mom! (in S,M,L sizes)

There are also patterns for bottoms that will go well with the sailor blouse. Skirts for the girls, Pants for the boys. There is a detailed step by step sewing lesson for the making of the pants, which is a simple elastic waistband pants with side pockets.

In this issue’s regular feature for older girls (130-150cm), there are some pretty spring blouses, tweed shorts, and a versatile Zip up all-in-one pattern which comes in two different variations. The dress variation (red) and the one-piece shorts romper (in black)

There is also a special occasion formal dress segment for girls. More casual wear – The blouse on the left is actually similar to the blouse made in the older girls section, and the dress on the left is a variation of the same pattern. That fabric on the right is so familiar, I’ve actually seen it at Spotlight. It is a Japanese cotton lawn that costs about $18/m (approx USD14.4/m). It’s scary how expensive fabric is here.

More pants for the boys, I wanted to show you this one because I really like the details on the short version – cuffed hem, box pleat pockets and button details. And now, some projects for the babies. More sailor suits. The pants are so cute! 🙂 For the girls, the outfit comes with a skirt that has a front pleat and contrast lining. This skirt pattern comes with full color step by step photographs.

Other than clothing projects, there are also patterns for accessories, like this fabric growth chart shaped in a giraffe. 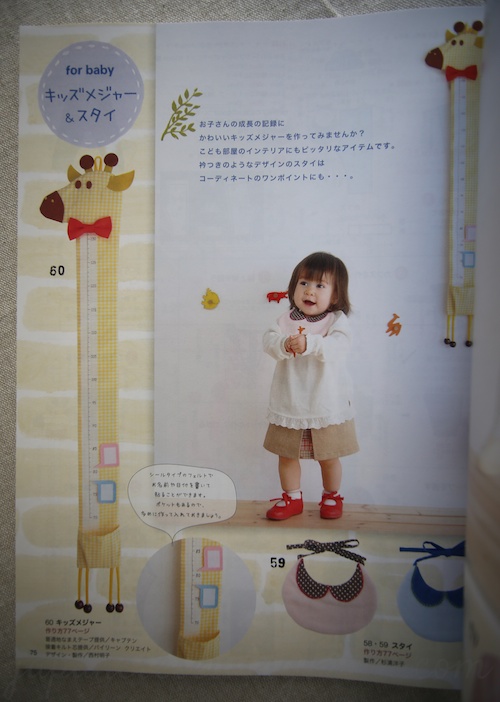 There is also a special feature for embroidery. A 5 page full color special with step by step photos on the different stitches, techniques and patterns you will need to personalize your sewing creations. Easy and cute stuff to make for kids. Welcome to Day#2 of our sewing video tutorial. Do you have all your materials ready? Let’s start!

To begin with, please refer to the layout diagram below, for the positioning of the different parts of the wallet. You will need to mark the position of the velcro strips on the outer and inner fabrics. Note the orientation of the inner (on top) and outer fabric (below). This is because the two pieces will be sewn with their wrong sides facing. Layout and positioning of pockets and velcro. Click on image to zoom in.

I feel a headache reading what I just wrote 😛 It’s hard to imagine orientation and right sides and wrong sides without actually seeing it! So please watch the video, it will make things so much clearer. If you have a fast internet connection, watch in HD!

I hope you enjoyed this quick and easy sewing video tutorial. Even if you did not sew along, bookmark the page for you might want to make this one day. Happy sewing and stay tuned for my next sewing video tutorial next month. I will be sewing using a pattern from one of my Japanese sewing books! 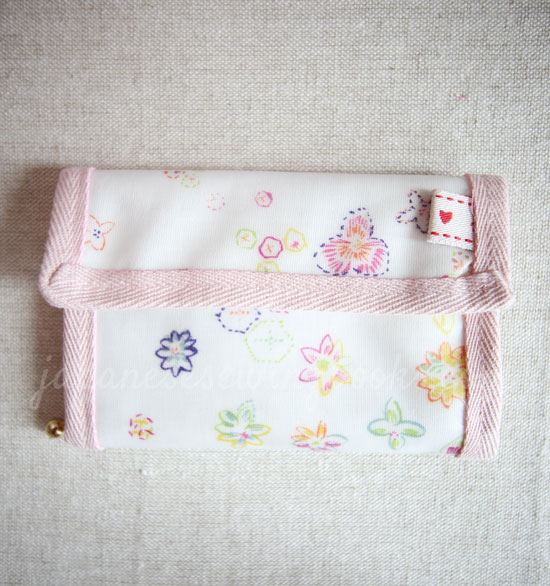 This month’s sew-along, or rather, sewing tutorial, is a simple wallet that I made for my girl to carry to school. As she is only in primary school, she only needs to carry some loose change, a couple of bills occasionally, as well as a single student ID card.  So this is a very simple, minimalistic wallet, which I thought will be great for traveling as well.  There is one zipped coin compartment, one ID card holder, as well as an additional card slot (behind the coin compartment). Both card slots are sized to fit a standard credit card size, but in actual fact there’s enough room for a few cards in both slots.

I am using naniIRO’s Field STAR Hooray_やっほー  laminated cotton. Isn’t it lovely? I bought it last June during my trip to the nani IRO atelier. I wasn’t looking for laminates in particular but there it was, standing against the wall in the corner, calling out my name ;P  I have been keeping it aside to make a bag of my own, but since it was so precious I was always afraid of sewing with it and possibly ruining it! This is a small little project which only requires a little bit of fabric so I mustered up the courage to cut! and I’m so glad I did. 🙂

It is really a very simple wallet and quick to sew, so there will only be two posts on this sew-along. Today is all about the materials, and I will post the pattern, or rather, the layout diagram, sewing video and how-to-make on Wednesday. This is so that you can have some time to get your materials ready. Please read my notes below with regards to the materials. Making a wallet usually requires interfacing but due to my choices of fabric I did not have to use any. So do prepare some medium/heavy weight interfacing to give your wallet some structure if you are using light/medium weight fabrics. Outer fabric
I am using laminated cotton fabric, which is great because it can stand up to dirt and stains. It is also quite stiff and sturdy thanks to the laminated layer. If you are using normal cotton fabric, you can use normal fabric reinforced with medium-heavy weight fusible interfacing. There are also iron on vinyls like those from Heat ‘n’ Bond if you have a favorite print you want to use that does not come in laminate options.

Billfold lining
I used an upholstery weight fabric (for cushions and curtains) for this, so I didn’t need to add interfacing. If your fabric is light weight or medium weight it will be a good idea to reinforce this layer with interfacing.

Plastic Sheet
The plastic sheet was actually salvaged from the plastic cover of an old diary. It is slightly frosted which is great because I find that glossy plastic tends to be sticky and sometimes printed cards will get stuck and leave marks on the plastic piece as well. Look around you for something you can recycle, like an old clear plastic file or old book covers. You can even use vinyl sheets (available in some fabric stores), although I must say that cards tend to stick to vinyl.

Cotton Twill Tape
These tapes come in both polyester and cotton options. Both are fine, but try to get one that is not so thick. I found mine a little too thick for my machine to handle, especially around the folds and overlapping bits, I had to manually maneuver my stitches over the thick areas.

Zip
In the list of materials I mentioned a 12cm zip. I chose a metal zip that was slightly longer because the metal zip stoppers on both ends would have made it difficult for me to sew the twill tape over. So I chose to use a slightly longer zip and cut off the excess.

Ok, time to go shopping for your materials! If you have them ready, move on to the next post for the tutorial – Simple wallet sewing video tutorial with free pattern –  Sew-along Day #2

Free Pattern, Tutorial and Sewing Video – Cross back apron for adult and kids The final post fo Back to School sewing month, as promised, will be a free sewing tutorial + patterns + video. The project I have chosen is a cross back apron!

END_OF_DOCUMENT_TOKEN_TO_BE_REPLACED

There is a top that I made previously that I keep

And here's a picture of me wearing the Shoulder Ga

It's sweater weather again and I finally got aroun